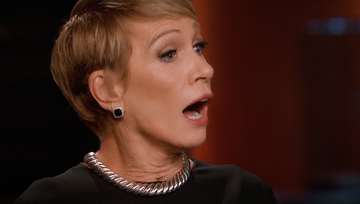 Originally published on The News & Observer:

bcain@newsobserver.comWhen Harriett Mills showed up at the studios for ABC’s “Shark Tank” to pitch her Raleigh-based business Wine & Design, she took along her husband, who is the company CCO. She also took a nude male model.

Yes, the model who dropped his robe on Friday night’s episode – causing the jaws of investors poised to hear Mills’ pitch to also drop – was really naked.

“That was actually my idea,” said Mills, in an interview Monday. “I needed to get the producers’ attention, and this is what got their attention. … He was actually naked. That was the first time ‘Shark Tank’ has ever had a nude anything on their show. It was a big deal. They had to make an announcement to the entire crew, so that if people weren’t comfortable they could leave.”

Mills, the Wine & Design CEO, said the male model – hired in Los Angeles – was a nod to a special Bachelorette Night concept the company introduced two years ago. Wine & Design, which currently has about 76 franchises in 15 states, offers nights of art classes – with wine, of course – for groups and individuals.

On Friday’s episode, Mills accepted an offer from Kevin O’Leary, typically seen as the toughest of the sharks on the program, which allows entrepreneurs and inventors to pitch businesses and products and hopefully win the help of investors.

Viewers likely expected Barbara Corcoran to bite on the Wine & Design deal. So did Mills, but that didn’t happen.

“I think deep down I kind of felt like we’d get Barbara because of her previous deals,” said Mills. “But when we got into the tank she acted like she was more aggressive and more rude to us than anything, so I kind of turned my nose up at her. Kevin was my second choice because of his wine connections.”

O’Leary invested in Zipz Wine in a 2014 episode of the program and is the founder of O’Leary Fine Wines.

“I’m happy that Kevin is part of the team and he bring lots of good partnerships to Wine & Design,” said Mills.

The terms of the exact deal with O’Leary are confidential, but Mills said the deal they agreed to on air was not the final deal.

“I think (the deal) has great potential for expansion and for us being more all over the nation,” said Mills. “We’ve already gotten almost 400 leads from Friday night. And hopefully it’ll bring awareness to existing franchisees.”

Mills also hopes the appearance brings more attention to a project closer to her heart – fundraising for ALS research in honor of her friend Chris Combs, a former N.C. State University baseball standout. In fact, this Thursday (May 18), all Wine & Design franchises will donate 100 percent of profits to Project ALS, in honor of Team Chris.

In all, Mills counts her “Shark Tank” time as positive.

“It was an amazing experience and I wouldn’t change anything. We’re excited to see what happens.”

Mills said she and her husband Patrick, the Wine & Design CCO who also owns Capital Signs Solutions in Raleigh, spent about two hours total in the tank, but the segment was edited down to around 6 minutes.

“When we got the deal I shimmied out in the hallway,” said Mills. “I’m very thankful they did not show that.”

You can watch the last five episodes of “Shark Tank” free on Yahoo, or on the ABC website with a cable log-in.