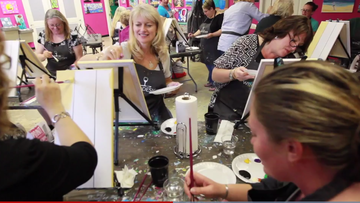 The Wine & Design locations in City Center at Oyster Point in Newport News and James City are bracing to get busier after the franchise's founder tells her story on ABC's "Shark Tank" TV show airing at 9 p.m. Friday.

"I'm excited to see what kind of response we get," said franchisee Christy Clements of the two Peninsula locations.

Hampton Roads has the opportunity for expansion, particularly if demand increases significantly after the "Shark Tank" episode, she said.

Clements opened Wine & Design at 707 Mariners Row in City Center in August 2015 and business has been booming there ever since, she said. She also took ownership of the Williamsburg area franchise at 4548 John Tyler Highway in James City's Five Forks area in February 2016.

She is planning to have a "Shark Tank" viewing party and painting class at the James City studio starting at 8 p.m. Friday.

CEO Harriett Mills co-founded Wine & Design with Emmy Preiss with the first party painting studio opening in Raleigh, N.C., in 2011, according to the Triangle Business Journal. Since then, the Wine & Design brand — part of a larger paint-and-sip trend — grew to 76 locations, including 10 in Virginia, according to its website.

Wine & Design offers two-hour painting classes led by instructors in addition to kids' one-hour, $10 Saturday morning classes and summer camps, said Clements, a mom of four. No experience is necessary and attendees walk away with a self-completed painting.

"People impress themselves all the time, and I think that's the coolest part of the job," she said.

Clements, 36, said she got started by attending classes at the Williamsburg area franchise, which originally opened in the Williamsburg arts district in 2012 before moving in 2014. Clements, who has a master's degree in education, became one of the studio's teaching artists for nearly two years before branching out with her own location.

While she is working to get ABC licensing for the full Wine & Design class experience, Clements said folks can bring their own wine or alcohol for private parties, including birthdays, bachelorette parties or corporate events. Wine & Design also can go mobile and bring the social art class to other sites, such as homes, or as part of events like conferences, Clements said.

"We're interested in working with anybody and everybody," Clements of James City said. "That's what it's all about with small businesses — its networking and looking out for each other."

For more information, find the studio sites at wineanddesign.com.

Bozick can be reached by phone at 757-247-4741. Sign up for a free weekday business news email at TidewaterBiz.com.

This article is related to: ABC